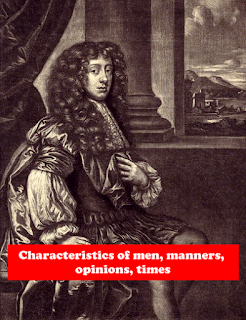 Excerpt from the editor's preface:
his edition of Shaftesbury's Characteristics reproduces all the essays he himself so entitled, with strict adherence to his text, as corrected by him for a reissue.
Of that corrected copy I have collated a large part with the reprints, and I find that his alterations were scrupulously given effect to, down to the smallest particulars. A few of the footnote references to corroborative passages in the book itself have here, as a matter of convenience, been altered back to their first form, specifying titles and sections of the essays rather than pages of the book; but no liberty has at any point been taken with the text beyond the modernizing of the spelling and disregard of the old italics and capitals.
Anthony Ashley Cooper, 1st Earl of Shaftesbury PC, known as Anthony Ashley Cooper from 1621 to 1630, as Sir Anthony Ashley Cooper, 2nd Baronet from 1630 to 1661, and as Lord Ashley from 1661 to 1672, was a prominent English politician during the Interregnum and the reign of King Charles II.
Shaftesbury's Characteristics of Men, Manners, Opinions, Times was published in 1711. It ranges widely over ethics, aesthetics, religion, the arts (painting, literature, architecture, gardening), and ancient and modern history, and aims at nothing less than a new ideal of the gentleman.
Editor:  J. M. Robertson
Publication date: 1900
Hosted on Google Drive
Download From Here Volume 1
Download From Here Volume 2
Next Post Previous Post
No Comment
Add Comment
comment url
Classic Books,Ethics,History