Best Napoleon Sayings and Image Quotes from His Diary

This is a collection of the best sayings of Napoleon that I found in The Corsican; a diary of Napoleon's life in his own words ( 1910 ) which is free and shared in studeybooks.com before. you can download it from here
After reading his diary, I found that Napoleon was an immoral person who does not care about anything but his goals. he used people, he lied to everybody but he was honest only to himself, but that does not mean denying he is one of the greatest leaders in history. 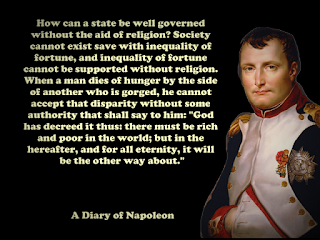 Always solitary among men, I am here, within doors, dreaming, and giving full vent to all my melancholy. To what will it drive me to-day? To thoughts of death. Still, at the dawn of life, I may hope for many days to come. 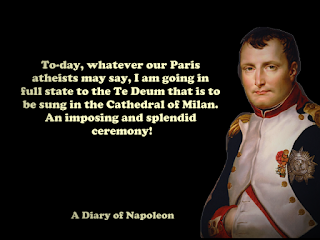 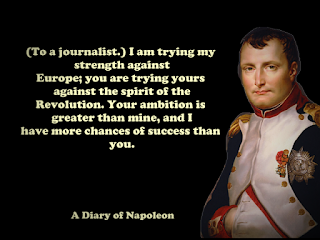 It was by becoming a Catholic that I pacified the Vendee and a Mussulman that I established myself in Egypt; it was by becoming ultramontane that I won over public opinion in Italy. If I ruled a people of Jews, I would rebuild the temple of Solomon! Paradise is a central spot whither the souls of men proceed along different roads; every sect has a road of its own. 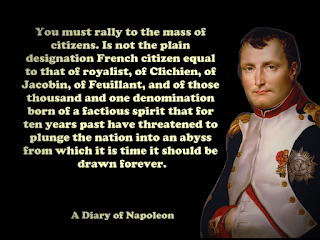 People of Egypt: You will be told that I have come to destroy your faith; believe it not! The answer that I am here to maintain your rights, to punish usurpers and that I respect even more than do the Mameluks, God, his Prophet, and the Koran!
People of Egypt: Tell them that in the eyes of God all men are equal; wisdom, talent, and virtue alone make the inequality of mankind. And what wisdom, what talent, what virtue, distinguish the Mameluks and entitle them to the exclusive enjoyment of all that makes life lovely and pleasant?
I have already learned a good deal: but we shall see. I think I shall have Bernadotte and Moreau against me. I am not afraid of Moreau; he is soft, has no energy. But Bernadotte! He has Moorish blood in his veins; he is bold and enterprising; he is related by marriage to my brothers; he dislikes me; I am pretty sure he will be against me. Well, we have only just arrived, we '11 see.
Patience! The pear is nearly ripe. 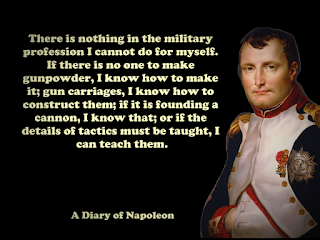 Wealth cannot confer a privilege. I have no intention of preaching collectivism; I am speaking between ourselves; I even want to have rich men, for that is the only way of supporting the poor; but I cannot admit that wealth is entitled to social or political distinction.
How can a state be well governed without the aid of religion? Society cannot exist save with inequality of fortune, and inequality of fortune cannot be supported without religion. When a man dies of hunger by the side of another who is gorged, he cannot accept that disparity without some authority that shall say to him: "God has decreed it thus: there must be rich and poor in the world; but in the hereafter, and for all eternity, it will be the other way about." 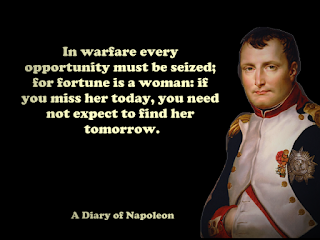 In warfare every opportunity must be seized; for fortune is a woman: if you miss her today, you need not expect to find her tomorrow.
I am a soldier because that is the special faculty I was born with; that is my life, my habit. I have commanded wherever I have been. I commanded, when twenty-three years old, at the siege of Toulon; I commanded in Paris at Vendemiaire; I carried the soldiers of the army of Italy with me as soon as I appeared among them; I was born that way. 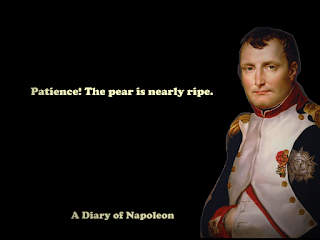 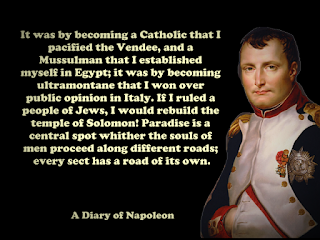 On my return to Paris, I found the Government divided, and all men agreed on this truth, that the Constitution was half-ruined and could not save the cause of liberty. All parties came to me, told me their plans, revealed their secrets, and asked for my support: I refused to be the tool of any party.
People of France, you will doubtless recognize in my conduct the zeal of a soldier of liberty, of a citizen devoted to the Republic. 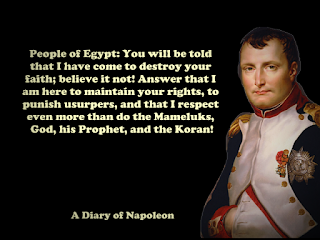 I appreciate all the friendliness of the offer you make me, my dear Junot; you know long since all the friendship I feel for you, and that you can count on it. Men may be unjust to me, but my innocence remains. My conscience is easy, therefore do nothing; you would only compromise me.
Soldiers! In fifteen days you have won six victories, captured twenty-one flags, fifty-five guns, several fortresses, conquered the richest part of Piedmont; you have made 15,000 prisoners; you have killed or wounded nearly 10,000 men. Until now you have fought for barren rocks. Lacking everything, you have accomplished everything. You have won battles without cannon, crossed rivers without bridges, made forced marches without boots, bivouacked without brandy, and often without bread. Only the phalanx of the Republic, only the soldiers of Liberty, could endure the things that you have suffered.
I will not remain here; there is nothing to be done. They will listen to nothing. I realize that if I stay my reputation will soon be gone. All things fade here, and my reputation is almost forgotten; this little Europe affords too slight a scope; I must go to the Orient; all great reputations have been won there. If the success of an expedition to England should prove doubtful, as I fear, the army of England will become the army of the East, and I shall go to Egypt. 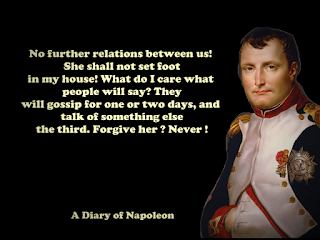 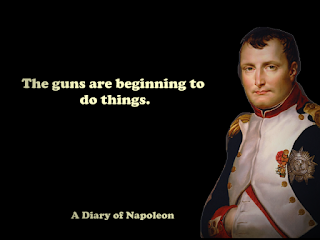 In these stormy days, the duty of a good Corsican is to remain at home. The general in command has offered me a commission as adjutant major of a volunteer battalion.
The country is distracted by fanatical
parties; it is difficult to seize the thread of such complex
events; how it will all turn out is more than I can guess,
but the aspect of things is very revolutionary.
The guns are beginning to do things. 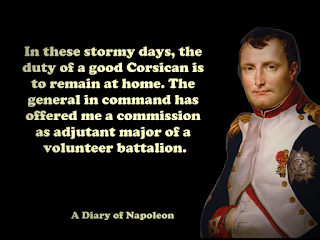 You must rally to the mass of citizens. Is not the plain designation French citizen equal to that of a royalist, of Clichien, of Jacobin, of Feuillant, and of those thousand and one denomination born of a factious spirit that for ten years past have threatened to plunge the nation into an abyss from which it is time it should be drawn forever?
(To a journalist.) I am trying my strength against Europe; you are trying yours against the spirit of the Revolution. Your ambition is greater than mine, and I have more chances of success than you.
To-day, whatever our Paris atheists may say, I am going in full state to the Te Deum that is to be sung in the Cathedral of Milan. An imposing and splendid ceremony!
I ! a royal maggot! I am a soldier, I come from the people, I have made myself! Am I to be compared with Louis XVI? I listen to everybody, but my own mind is my only counselor. There are some men who have done France more harm than the wildest revolutionaries, — the talkers, and the rationalists. Vague and false thinkers, a few lessons of geometry would do them good!
My policy is to govern men as the great number wish to be governed. That, I think, is the way to recognize the sovereignty of the people.
The impact of an army, like the total of mechanical coefficients, is equal to the mass multiplied by the velocity. A battle is a dramatic action that has its beginning, its middle, and its conclusion. The result of a battle depends on the instantaneous flash of an idea. When you are about to give battle concentrate all your strength, neglect nothing; a battalion often decides the day.
There is nothing in the military profession I cannot do for myself. If there is no one to make gunpowder, I know how to make it; gun carriages, I know how to construct them; if it is founding a cannon, I know that; or if the details of tactics must be taught, I can teach them. 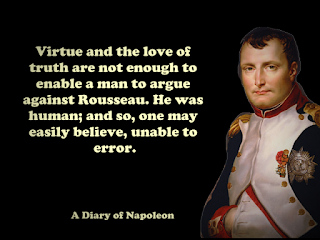 Virtue and the love of truth are not enough to enable a man to argue against Rousseau. He was human; and so, one may easily believe, unable to error.
Books' Quotes
Next Post Previous Post
No Comment
Add Comment
comment url
Napoleon