A history of eclecticism in Greek philosophy 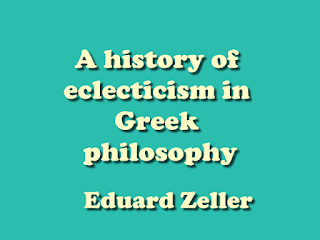 This is a translation of the second section of Dr. Zeller's "Philosophic der Griechen, Dritter Theil, Erste Abtheilung." The first section of the volume, concerning the Stoics, Epicureans, and Sceptics, has already been translated by Dr Reichel. The present translation has been made from the third and latest edition of the German work.

Eclecticism is a conceptual approach that does not hold rigidly to a single paradigm or set of assumptions, but instead draws upon multiple theories, styles, or ideas to gain complementary insights into a subject, or applies different theories in particular cases.

ORIGIN AND CHARACTER OF ECLECTICISM . 1
The gradual blending of the schools of philosophy: internal causes of this, 1 sq. External causes: diffusion of Greek philosophy among the Romans, 5. The reaction of that diffusion upon philosophy, 14. Principle and character of eclectic philosophy, 17. Contained the germs of the later scepticism, 21 ; and of Neo-Platonism, 22
ECLECTICISM IN THE SECOND AND FIRST CENTURIES
BEFORE CHRIST — THE EPICUREANS — ASCLEPIADES 24 Relation of the later Epicureans to Epicurus, 24. Asclepiades of Bithynia, 29 sq.
THE STOICS : BOETHUS, PANiETIUS, POSIDONIUS. 34
Successors of Chrysippus, 34. Boethus, 35. Panastius, 3D. The character of his philosophy, 42. Deviations from Stoicism, 43 sq. Ethics, 47. Contemporaries and disciples of I'anaetius, 52. Posidonius, 56. His philosophic tendencies, 59. His anthropology, 64. Other Stoics of the first century before Christ, 70
THE ACADEMIC PHILOSOPHERS IN THE FIRST CENTURY BEFORE CHRIST . . 75
Philo of Larissa, 75. His practical bias, 77. Modification of the scepticism of the Academy, 79. His theory of knowledge, 81. Antiochus of Ascalon, 85. Polemic against scepticism, 87. Eclecticism: essential agreement of the various systems, 91; theory of knowledge, 93. Physics and metaphysics, 94. Ethics, 95. School of Antiochus, 99. Eudora, 103. Arius Didymus, 106.
THE PERIPATETIC SCHOOL IN THE FIRST CENTURY BEFORE CHRIST . . .112
The Commentators: Andronicus of Rhodes, 113. Boethus of Sidon, 117. Aristo, Staseas, Cratippus, Nicolaus, Xenarchus, and others, 121 sq. The treatise various theories as to its origin, 125. Nature of the treatise, 132. Origin and date of composition, 138. Treatise on virtues and vices, 145
CICERO — VARRO . . .146
Cicero, 14G. His scepticism, 149. Its limits, 151. A practical view of philosophy, 15G. Eclecticism: the doctrine of innate knowledge, 159. Ethics, 162. Theology, 167. Anthropology, 169. Varro, 171. His view of philosophy and the various schools, 172. Ethics, 173. Anthropology and philosophy, 176
Translated by Sarah Alleyne
Publication date :/(1883)
London, Longmans, Green, and Co
Download 21 MB