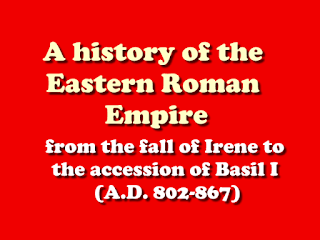 A history of the Eastern Roman

Empire from the fall of Irene to the accession of Basil I (A.D. 802-867)
The history of Byzantine civilization, in which social elements of the West and the East are so curiously blended and fused into a unique culture, will not be written for many years to come. It cannot be written until each successive epoch has been exhaustively studied and its distinguishing characteristics clearly ascertained. The fallacious assumption, once accepted as a truism, that the Byzantine spirit knew no change or shadow of turning, that the social atmosphere of the Eastern Rome was always immutably the same, has indeed been discredited; hut even in recent sketches of this civilization by competent hands we can see unconscious survivals of that belief.
The curve. of the whole development has still to be accurately tracked, and this can only be done by defining each section by means of the evidence which applies to that section alone. No other method will enable us to discriminate the series of gradual changes which transformed the Byzantium of Justinian into that — so different in a thousand ways — of the last Constantine.
[Download From Here ##download##]