A book of remarkable criminals 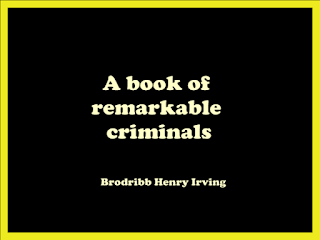 Excerpt :
I remember my father telling me that sitting up late one night talking with Tennyson, the latter remarked that he had not kept such late hours since a recent visit of Jowett. On that occasion, the poet and the philosopher had talked together well into the small hours of the morning.
My father asked Tennyson what was the subject of conversation that had so engrossed them. "Murders," replied Tennyson. It would have been interesting to have heard Tennyson and Jowett discussing such a theme. The fact is a tribute to the interest that crime has for many men of intellect and imagination. Indeed, how could it be otherwise? Rob history and fiction of crime, how tame and colourless would be the residue!
We who are living and enduring in the presence of one of the greatest crimes on record must realize that trying as this period of the world's history is to those who are passing through it, in the hands of some great historian it may make very good reading for posterity. Perhaps we may find some little consolation in this fact, like the unhappy victims of famous freebooters such as Jack Sheppard or Charley Peace.
But do not let us flatter ourselves. Do not let us, in all the pomp and circumstance of stately history, blind ourselves to the fact that the crimes of Frederick, or Napoleon, or their successors, are in essence no different from those of Sheppard or Peace.
We must not imagine that the bad man who happens to offend against those particular laws which constitute the criminal code belongs to a peculiar or atavistic type, that he is a man set apart from the rest of his fellow men by mental or physical peculiarities
. That comforting theory of the Lombroso school has been exploded, and the ordinary inmate of our prisons shown to be only in a very slight degree below the average in mental and physical fitness of the normal man, a difference easily explained by the environment and conditions in which the ordinary criminal is bred.