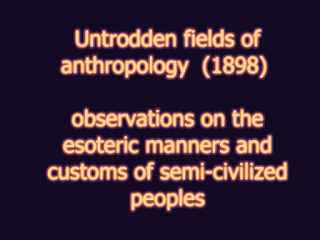 by D. Jacobus; and translated by  Charles Carrington,
"I hare passed twenty-eight years of my life amongst diverse races, in all the five great divisions of the World. By giving my professional sen-ices to the' natives of each place I visited, and by studying their language, I was able to gain their confidence, and learn much about their customs, manner of living, habits, etc.
Having made diseases of the genitourinary organ my specialty, I was often consulted in these cases, and therefore collected much valuable information: I was not merely satisfied with observing the effect of the human passions, but it appeared to be indispensable to trace these passions back to their moral causes and make a psychological study of those causes.
Whilst following in foreign countries the path of science which has been already traced by that eminent authority, Tardieu, I have avoided trenching on the ground covered by his remarkable Medico-Legal Study of Offences against Morals.
I have chosen a wider field for my enc[uiries. Like Moreau (of Tours), I believe in a sixth sense, the Genital Sense, the existence of which he has psychologic^ ally proved, by showing that its special functions were distinct from those of the other senses. It is the philosophical and medical study of this sixth sense that I had in view in compiling this work; and also an examination of those changes and irregularities which this sense undergoes, not only under the influence of temperament and constitution in the various races, but from manners, customs, and religious superstitions.
Some contents of the book:
Cochin-China thirty years ago.— A few words about Saigon as it was.— Other Asiatic races, besides the Annamites, inhabiting Cochin-China.— The Hindoos, otherwise known as Malabars.— Cambodians.— Malays.— Moys.— Anthropological characteristics of the Moys.— Chams.— The Tagals of Manilla.— The Chinese town of Cholon. —The Chinese race.— Trades and professions — Diversity of anthropological types amongst the Chinese.— The Minhnongs.— A few words on the manners and customs of the Chinese and Cochin-Chinese. — The Chinese theatre. [Page 1 Chapter II. The origin of the Annamites, otherwise called Giao-Chi. — Anthropological characteristics of the race. — Genital organs of the Annamites. — Their small size.— The child is taken as a basis of comparison for the medical part of this subject.— The little Annamite girl, and her early loss of virginity.— Women at the age of puberty. — The genital organs of the adult. — Pranco- Annamite mongrels. [Page
updated
[Download From Here ##download##]
Sexuality
Next Post Previous Post
No Comment
Add Comment
comment url
Anthropology,History,Mythology and Folklore,Sexuality