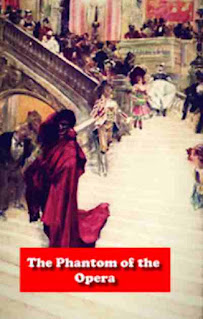 Sightings of a ghostly figure in the Paris opera house lead to a discovery of a disfigured genius who secretly lives among its passageways
The Phantom of the Opera is a novel by French writer Gaston Leroux. It was first published as a serialization in Le Gaulois from 23 September 1909, to 8 January 1910. It was published in volume form in late March 1910 by Pierre Lafitte
In the 1880s, in Paris, the Palais Garnier Opera House is believed to be haunted by an entity known as the Phantom of the Opera, or simply the Opera Ghost. A stagehand named Joseph Buquet is found hanged, the noose around his neck missing. At a gala performance for the retirement of the opera house's two managers, a young, little-known Swedish soprano, Christine Daaé, is called upon to sing in place of the Opera's leading soprano, Carlotta, who is ill, and Christine’s performance is an astonishing success.
Download 9.8 MB