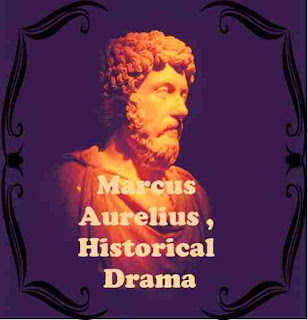 Marcus Aurelius faces mutiny by his friend and betrayal from his wife. How will the good emperor react?

Marcus Aurelius Antoninus was a Roman emperor from 161 to 180 and a Stoic philosopher. He was the last of the rulers known as the Five Good Emperors, and the last emperor of the Pax Romana, an age of relative peace and stability for the Roman Empire. He served as Roman consul in 140, 145, and 161.
some excerpts:
MARCUS. He doubts that Victorinus has been slain And that these hordes cannot be held at bay Without a quick relief. What must he have! Summon the Senate. Friends, go into dinner And let me be excused. Vectilianus, Despatch a word from me immediately Promising help, but they must hold the town Although the walls should crumble under them; For Aquileia taken, all these wolves Will fall upon our helpless provinces And wreck them utterly. Go in, I pray you.
MARCUS. A flight of locusts will destroy a spot An army failed to wreck. I go myself To put fresh courage in my soldiers' hearts With presence and example; these ill tidings The massacre of Victorinus' troops. The universal and concerted rise Of these barbaric tribes gives easy cause For apprehension to the boldest.
publication date: 1912
Author: John Presland