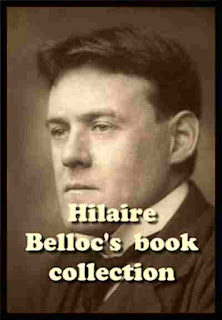 Joseph Hilaire Pierre René Belloc was a British-French writer and historian and one of the most prolific writers in England during the early twentieth century. Belloc was also an orator, poet, sailor, satirist, writer of letters, soldier, and political activist
Hilaire Belloc grew up in England and would spend most of his life there. His boyhood was spent in Slindon, West Sussex, for which he often felt homesick in later life, as evidenced in poems such as "West Sussex Drinking Song", "The South Country", and even the more melancholy, "Ha'nacker Mill".
After being educated at John Henry Newman'] Oratory School in Edgbaston, Birmingham, Belloc served his term of military service, as a French citizen, with an artillery regiment near Toul in 1891.
He proceeded to Balliol College, Oxford, as a history scholar, securing a first-class honours degree and never losing his love for Balliol, as is illustrated by his verse "Balliol made me, Balliol fed me/ Whatever I had she gave me again".
Belloc is the author of more than 150 books, Belloc wrote on myriad subjects, from warfare to poetry to the many current topics of his day.
This collection of some of his best public domain books that were collected by me from Archive.org