The works of Epictetus 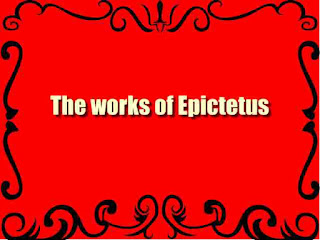 Consisting of his discourses, in four books, the Enchiridion, and fragments. A translation from the Greek-based on that of Elizabeth Carter

Epictetus limits himself strictly to giving a code of practical ethics. Not ignoring metaphysics in its proper place, he directs his aims elsewhere. His essential principles are very simple. All things (he holds) receive their character from our judgment concerning them; all objects, all events, are merely semblances or phenomena, to be interpreted according to the laws which nature gives us.
An obvious classification at once occurs; all things are either controllable by will, or uncontrollable. If controllable, we may properly exert towards them our desire or aversion, though always guardedly and moderately. If uncontrollable, they are nothing to us, and we are merely to acquiesce, not with resignation alone, but joyously, knowing that an all-wise Father rules the whole.
All success comes, according to Epictetus, from obedience to this rule; all failure proceeds from putting a false estimate on the phenomena of existence, from trying to control what is uncontrollable, or from neglecting what is within our power.
" Two rules we should have always ready, — that there is nothing good or evil save in the Will; and, that we are not to lead events, but to follow them." (p. 221.) This last is singularly identified with the wise Quaker motto, on which Elizabeth Fry based her remarkable practical successes, " to follow, not force, Providence." These simple principles are developed pithily in the " Enchiridion " or Manual, and more elaborately in the Discourses.
Neither work was written by Epictetus, but both were taken down from his lips. The " Enchiridion " was made the subject, in the sixth century, of an elaborate Greek Commentary by Simplicius, which was translated into English by Stanhope, and was again made the text for a commentary longer than itself by Milton's adversary, Salmasius.
There is no stain upon the consistent nobleness of these Discourses. One can point out some omissions, some points where our subtle human organization excludes the simple system of Epictetus. But all which is here is noble. All the common complaints against the Stoic philosophy, — all charges of arrogance, uncharitableness, cold isolation, approval of suicide, — are refuted altogether by his clear statements. " What is the first business of one who studies philosophy? To part with self-conceit. ,, (p. 148.) "
That we ought not to be angry with the erring," forms the subject of a special chapter, (p. 54.) " All is full of beloved ones .... by nature endeared to each other." (p. 266.) " Who is there whom bright and agreeable children do not attract to play and creep and prattle with them? " (p. 185.) The philosopher, " when beaten, must love those who beat him." (p. 250.) As to suicide, there is a special argument against it. (p. 30.) In other places he al- ludes to it ironically, in a sort of contempt; or vindicates Providence by showing that we are not coerced even into living on earth if we do not desire, but even in this last resort, our will is free.
He also implies, more than once, that suicide, which is the cowardice of a moment, is after all less blasphemous than the settled habit of the faithless complaint. For this querulousness is what rouses beyond all things his indignation. In his practical examples, he constantly recurs to the noblest traits of his famous predecessors, — as Socrates, Diogenes, and Zeno; and he also gives us glimpses of the finest characters, whose names are else unfamiliar, — as Rufus and Euphrates.
So far as the scanty record goes, and the testimony of contemporaries, Epictetus was himself such a man. He was probably born at Hierapolis in Phrygia, and he lived at Rome, in the first century of our era, as the slave of Epaphroditus, a freedman of Nero. Origen preserves an anecdote of Epictetus, that when his master once put his leg in the torture, his philosophic slave quietly remarked, " You will break my leg "; and when this presently happened, he added, in the same tone, " Did I not tell you so? " He afterwards became free, and lived very frugally at Rome, teaching philosophy.
the book details : Download 18.5   MB