The Races Of Mankind by M. Nesturkh 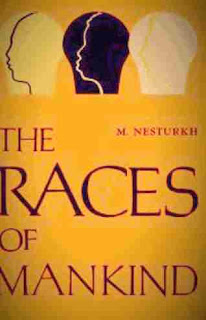 This present book, by Professor M. F. Nesturkh, is based on the methodological principles of Soviet anthropology and the factual data obtained by that science. The author connects the origin of the races with the origin of mankind as a whole and acquaints the reader with the present status of these two problems; he deals at length with the history of the formation, dissemination and mingling of individual anthropological (racial) types and their groups, uses facts to expose the reactionary nature of racism and proves that it has no foundation in science.
The problem of the races of mankind is one of the most important in anthropology, the science that studies the natural history of man with all the variations due to age, sex, geographical and other factors. The races of mankind are, in actual fact, geographical (or territorial) variations, historically conditioned, of a single physical type of man.
A correct conception of the races of mankind is of particularly great political and scientific importance today, in the period of the collapse of the colonial system and the unparalleled development of the struggle for national liberation by the dependent and colonial peoples. The ideologists of imperialism, in their efforts to provide a basis for class, national and colonial oppression, have advanced the false “theory” of the physical and mental inequality of races, of the existence of “higher” and “lower” races, of races that are capable and those that are incapable of independent social, economic and cultural development.
Contents of the book:
Preface 5
Introduction 8
Definition Of The Races Of Mankind 11
I. Racial Characteristics And Their Study 11
2. The Negroid Great Race 18
3. The Europeoid Great Race 23
4· The Mongoloid Great Race 25
5· Features Common To All Races 29
Races And The Origin Of Man 31
1. Fossil Men Of The Modern Type 31
2. Neanderthal Man-the Ancestor Of Modern Man 33
3. Earliest Man-the Ancestor Of The Neanderthaler  36
4. The Anthropoids-the Ancestors Of The Earliest Men 41
5. The Racial Peculiarities Of Man And The Anthropoid Type Of
Structure 46
6. The Main Features Of The Structure Of The Human Body: Band,
Foot, Brain 52
The Origin Of The Races 57
1. The Races Of Mankind-the Result Of Historical Development 57
2. Geographical And Social Isolation 59
3. Natural Selection 61
4. Intermarriage 63
5. The Formation Of The Great Races 66
6. The Europeoid Great Race 69
7. The Negroid Great Race 75
8. The Mongoloid Great Race 89
Races And Racism 96
1. The Essence Of Racism  96
2. Race And Language 99
3· Race And Mentality 101
4· Equality Of Races And Nations In The U.s.s.r 105
Vladimir An (Illustrator), George Hanna (Translator) Author:  M. Nesturkh published in the Soviet Union.
64 MB