The present evolution of man 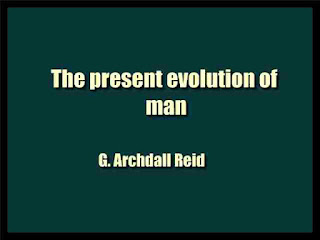 During the quarter of a century which has elapsed since Biology began to occupy itself again with general problems, at least one main fact has been made clear by the united labours of numerous men of science, viz. the fact that the theory of descent, the idea of development in the organic world, is the only conception as to the origin of the latter which is scientifically tenable.
It is not only that, in the light of this theory, numerous facts receive for the first time a meaning and a significance; it is not that, under its influence, all the ascertained facts can bo harmoniously grouped together; but in some departments, it has already yielded the highest results which can be expected from any theory, it has rendered possible the prediction of facts, not indeed with the absolute certainty of calculation, but with a high degree of probability. It has been predicted that man, who in the adult state only possesses twelve pairs of ribs, would be found to have thirteen or fourteen in his embryonic state; it has been predicted that, in this early period in his existence, he would possess the insignificant remnant of a very small bone in his wrist, the so-called centrale, which must have existed in the adult condition of his extremely remote ancestors.
Both predictions have been fulfilled, just as the planet, Neptune was discovered after its existence had been predicted from the disturbance induced in the orbit of Uranus. " That existing species have not arisen independently, but have been derived from other and mostly extinct species, and that on the whole, this development has taken place in the direction of greater complexity, may be maintained with the same degree of certainty as that with which astronomy asserts that tlie earth moves round the sun ; for a conclusion may be arrived at as safely by other methods as by mathematical calculation.
If I make this assertion so unhesitatingly I do not make it in the belief that I am bringing forward anything new, nor because I think that any opposition will be encountered, but simply because I wish to begin by pointing out the firm ground on which we stand, before considering the numerous problems which still remain unsolved.
Such problems appear as soon as we pass from the facts of the case to their explanation; as soon as we pass from the statement, The organic world has arisen by development, to the question. But how has this been affected, by the action of what forces, by what means, and under what circumstances? " In attempting to answer these questions we are very far from dealing with certainties; opinions are still conflicting. But the answer lies in the domain of future investigation, that unknown country which we have to explore.
It is true that this country is not entirely unknown, and if I am not mistaken, Charles Darwin, who in our time has been the first to revive the long-dormant theory of descent, has already given a sketch, which may well serve as a basis for the complete map of the domain; although perhaps many details will be added, and many others were taken away. In the principle of natural selection, Darwin has indicated the route by which we must enter this unknown land.
Sir George Archdall O'Brien was a Scottish physician and a writer on public health and on the subject of evolution. A socialist, he was interested in the effects of alcohol on society, and in the evolution of races. He was one of the first to identify alcoholism as a disease.