The nature of being 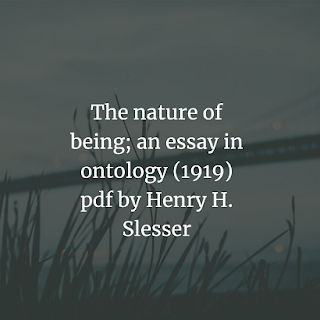 It is commonplace that Ontology is discredited and that all attempts to pass beyond the confines of Knowledge in philosophic inquiry are suspect.
To attempt here to justify so perilous a departure from metaphysical convention as to assume Being beyond Knowledge would be to write this book in the Introduction, a course which is not to be encouraged. In the First Part of this essay, the method of metaphysical statement is discussed. Part Three is devoted to Being — the prediction of the Data of possible knowledge, which Data are considered in the Second Part, while, in the Fourth Part, the conclusions which have been drawn from the earlier portions are summarized.
Ontology is the philosophical study of the nature of being, becoming, existence, or reality. It is part of the major branch of philosophy known as metaphysics. Ontology deals with questions about what things exist or can be said to exist, and how such entities can be grouped according to similarities and differences.
[Download This PDF Book ##download##]
Next Post Previous Post
No Comment
Add Comment
comment url
Ontology,Philosophy