The journal of a disappointed man 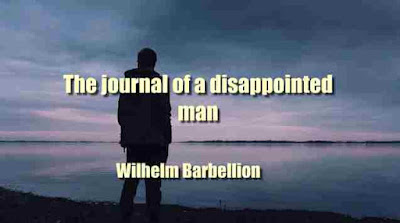 Introduction by H. G. Wells
Your egoist, like the solitary beasts, lives only for himself; your altruist declares that he lives only for others; for either there may be success or failure but for neither can there be a tragedy.
For even if the altruist meets nothing but ingratitude, what has he to complain of? His premises abolish his grounds of complaint. But both egoists and altruists are philosophical abstractions.
The human being by nature and necessity is neither egoist nor altruist; he trims a difficult course between the two; for the most part, we are, within the limits of our powers of expression, egotists, and our desire is to think and if possible talk and write about this marvellous experiment of ourselves, with all the world — or as much as we can conveniently assemble — for the audience. There is variety in our styles.
Review by Rys
One of the best books I have read this year and in fact one of the best books I have ever read. I believe that all readers who are interested in the human condition should read it. From the point of view of what it means to be a living person, it contains the spectrum of everything. Really amazing and I think it could be more than amazing: it could be an epiphany. It's one of the most quotable books I have ever read
Wilhelm Nero Pilate Barbellion was the nom-de-plume of Bruce Frederick Cummings, an English diarist who was responsible for The Journal of a Disappointed Man. Ronald Blythe called it "among the most moving diaries ever created"
Download Zip file contains PDF ebook 6.1 MB