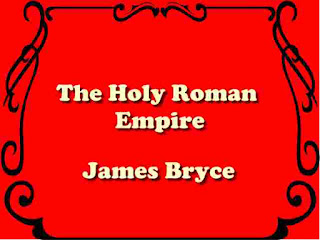 A classic. Describes the Holy Empire as an institution or system, the wonderful offspring of a body of beliefs and traditions which have almost wholly passed away. Chronological table of Emperors and Popes.

The object of this treatise is not so much to give a narrative history of the countries included in the Romano-Germanic Empire — Italy during the middle ages, Ger-many from the ninth century to the nineteenth — as to describe the Holy Empire itself as an institution or system, the wonderful offspring of a body of beliefs and traditions which have almost wholly passed away from the world.
Such a description, however, would not be intelligible without some account of the great events which accompanied the growth and decay of imperial power; and it has therefore appeared best to give the book the form rather of a narrative than of a dissertation; and to combine with an exposition of what may be called the theory of the Empire an outline of the political history of Germany, as well as some notices of the affairs of mediaeval^ Italy.
To make the succession of events clearer, a Chronological List of Emperors and Popes has been prefixed*.

CHAPTER I.
Introductory.
CHAPTER II
The Boman Empire before the Invasion of the Barbarians.
The Empire in the Second Century 5
Obliteration of National distinctions 6
Rise of Christianity 10
Its Alliance with the State 10
Its Influence on the Idea of an Imperial Nationality 13
CHAPTER III.
The Barbarian Invasions.
Relations between the Primitive Germans and the Romans .... 15
Their Feelings towards Rome and her Empire 16
Belief in its Eternity 20
Extinction by Odoacer of the Western branch of the Empire. . . . 26
Theodoric the Ostrogothic King 27
Gradual Dissolution of the Empire 30
The permanence of the Roman Religion and the Roman Law 31
CHAPTER IV.
Restoration of the Empire in the "West.
The Franks 34
Italy under Greeks and Lombards 37
The Iconoclastic Schism 38
Alliance of the Popes with the Frankish Kings 39
The Frankish Conquest of Italy 41
Adventures and Plans of Pope Leo III 43
Coronation of Charles the Great 48
CHAPTER V.
Empire and Policy of Charles.
Import of the Coronation at Rome 52
Accounts are given in the Annals of the time 53
The question as to the Intentions of Charles 58
Legal Effect of the Coronation 62
Position of Charles towards the Church 64
Towards his German Subjects 67
.Towards the other Races of Europe 70
General View of his Character and Policy 72
CHAPTER VI.
Carolingian and Italian Emperors. V^
Reign of Lewis I 76
Dissolution of the Carohngian Empire 78
Beginnings of the German Kingdom 79
Italian Emperors 80
Otto the Saxon King 84
Coronation of Otto at Rome 87'
CHAPTER VII.
Theory of the Medieval Empire.
The World Monarchy and the World Religion 91
Unity of the Christian Church 94
Influence of the Doctrine of Realism 97
The Popes as heirs to the Roman Monarchy 99
The character of the revived Roman Empire 102
Author: JAMES BRYCE
James Bryce, 1st Viscount Bryce, OM, GCVO, PC, FRS, FBA was an Ulster-born academic, jurist, historian, and Liberal politician
Date: 1880
Download 17 MB