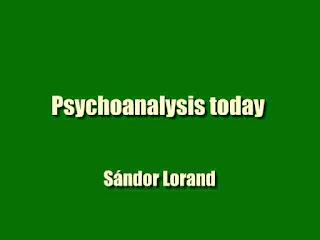 Excerpt:
It is just short of fifty years since Freud made his initial contribution to the study of certain types of human suffering. This was but the first bubbling from a rich spring of clear understanding of the human personality which has become, in the few decades of its further outpourings, a veritable Amazon among the streams of scientific thought.
Of the origins, sources, reinforcements, and tortuous early flowing of this cultural stream Freud himself has written in the History of the Psychoanalytic Movement, 1 which no serious student of the mental sciences can afford to neglect. This same student should also acquaint himself with the short auto-biography of Freud which, as he himself states, is concerned chiefly with the history of psychoanalysis. 2 "These Eventful Years," an article published in the Encyclopedia Britannica (1924), should also be read by anyone wishing to orient himself to the background which the present collection of essays aims to explain in the terms of the latest developments. To round out the outlines of psychoanalytical history still further, one other contribution.
The Significance of Psychoanalysis for the Mental Sciences/ by O. Rank and H. Sachs— is of much significance, since it clearly indicates in what directions the original scheme of the studies pursued by Freud and his circle had begun to develop as far back as 1913.
Here is a vision of the manifold possibilities incidental to the spread of the applications of the conceptions originally enunciated by Freud. The rich fulfilment of this vision is history. These are but a few of the outstanding historical beacons to which attention is here drawn since the present collection ,
"Man is but a focus of happening, a gateway through which the infinite stream of change flows ceaselessly. The sensible organism is only a point, a sort of transit station which stands for an infinite past of development, for the history and experience of untold millions of ancestors, and in a vague indefinite way for the future which will include an indefinite number of descendants. The past, the present, the future all meet in that little structural centre, that little wayside station on the infinite trail of life."
It is of little consequence that, from the larger cosmic view of the universe, man is but a little wayside station on the infinite trail of life. For himself— as a living feeling organism— he is the whole of life, and, even in the cosmic sense, as a time-binding animal, he contains all of the past and the hope of an equal span of future.