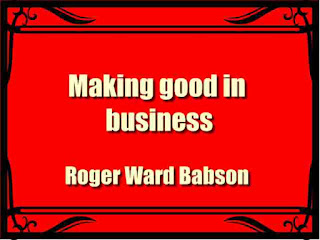 In this day of heart-breaking competition, making good in business is ordinarily considered as being a job big enough to engage the best energies of any man whomsoever he may be, whatsoever his calling. The percentage of men who really make good is pitifully small.
To learn of a man who possessed the willpower to rise from his bed at a time when he was considered as good as dead, select a vocation, make good in that vocation, using only the most upright and ethical methods in so doing; to learn of a man who did all that, and still has time, and strength, and heart to turn around and tell others how they also can climb the rugged heights, is immensely interesting.
What was it genius? Mr. BabsOn says not, but just plain upright determination and work. He has a passion for work. But whatever it may have been one thing is certain, that one who has risen over such obstacles to a great nation-wide success has qualified himself to write authoritatively on the subject " Making Good in Business.
The service that Mr Babson's wonderful business organization renders is in the preparation and supply of statistical reports. Statistics are proverbially dry, and yet so thoroughly and so conscientiously is the service rendered, that too many thousands of American businessmen, the information supplied by the Babson Statistical Organization constitutes the inspiration of the day, a living demonstration of what intensity of purpose can accomplish in the direction of exalting the commonplace. Babson does not believe in switching from one business to another in the hope that, eventually, some smooth path to success may be found. He is not much interested in smooth pathways.
His is the pioneer spirit. He prefers to blaze his own trails. His plan is not to see how much he can get out of a business, but rather how much he can put into it; and he views his business as one of his best opportunities to serve society. He has not led the manner of life which one would expect to be productive of a prophetic vision. On the face of it, it has been too closely connected with cold, hard facts. Yet that this man of facts and figures has been inspired by a prophetic vision no one who reads this book can doubt.
When Mr Babson looks at an object he observes more than its colour. Colour is only skin deep, and Babson's keen vision pierces the object through and through. He does not waste his fire on little things; life is too brief a sojourn. He considers the possession of his talents a sacred trust and proposes to render a good account of his stewardship. Seeking the spiritual he has achieved abundant success in things material, thereby demonstrating the truth of the adage " He profits most who serves best."
the book details : Download 3 MB