James George Frazer's Golden Bough and his other works 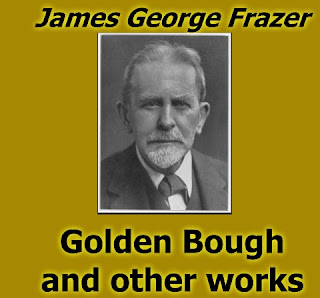 The Golden Bough: A Study in Comparative Religion (retitled The Golden Bough: A Study in Magic and Religion in its second edition) is a wide-ranging, comparative study of mythology and religion, written by the Scottish anthropologist Sir James George Frazer.
The Golden Bough was first published in two volumes in 1890; in three volumes in 1900; and in twelve volumes in the third edition, published 1906–1915. It has also been published in several different one-volume abridgments. The work was aimed at a wide literate audience raised on tales as told in such publications as Thomas Bulfinch's The Age of Fable, or Stories of Gods and Heroes (1855). The influence of The Golden Bough on contemporary European literature and thought was substantial.

Frazer attempted to define the shared elements of religious belief and scientific thought, discussing fertility rites, human sacrifice, the dying god, the scapegoat, and many other symbols and practices whose influences had extended into the 20th-century culture. His thesis is that old religions were fertility cults that revolved around the worship and periodic sacrifice of a sacred king. Frazer proposed that mankind progresses from magic through religious belief to scientific though
Check Wikipedia for more information
https://en.wikipedia.org/wiki/The_Golden_Bough
Author: Sir James George Frazer was a Scottish social anthropologist and folklorist influential in the early stages of the modern studies of mythology and comparative religion. His most famous work, The Golden Bough, documents and details the similarities between magical and religious beliefs around the world.

Contents of the collection ( Golden bough and other works by Sir. James George Frazer )