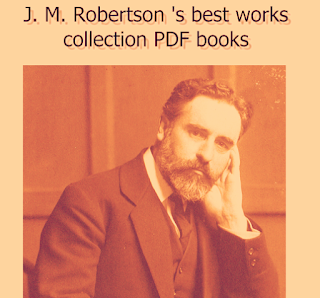 John Mackinnon Robertson was a prolific journalist, an advocate of rationalism and secularism, and a Liberal Member of Parliament in the United Kingdom for Tyneside from 1906 to 1918.
J. M. Robertson was an encyclopedian author; he wrote about many topics; politics, religions, literature, folklore, and rationalism
In 1856, John Mackinnon (J.M.) Robertson was born on the Isle of Arran, Scotland. He left school at 13, joined the staff of the Edinburgh Evening News in 1878, and several years later moved to London to work on the National Reformer, Charles Bradlaugh's publication, which he edited until 1893. That year Robertson founded the Free Review, which he published for two years. He lectured in the United States in 1897- 1898. In 1900, Robertson travelled to South Africa to report on martial law for the Morning Leader. From 1906 to 1918 he served in Parliament.
Robertson specialized in comparative mythology and believed Jesus never existed. He wrote Christianity and Mythology (1900) and Pagan Christs (1903), still influential works. Other books include Short History of Christianity (1902) and Short History of Freethought (2 volumes, 1915). His expertise extended to economics, linguistics and politics. "No man has rendered higher service to British Rationalism in the last four decades, and few, especially among self-educated men, have attained such reputable command of so many branches of culture," wrote freethought historian Joseph McCabe in 1920. D. 1933.
This collected those books from American and Canadian Libraries to make it easier for students and the general reader to know about some great author and their works.
Content of the collection: