Hyde Park, its history and romance 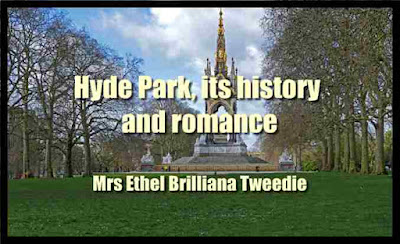 A rapid and informative survey of " some of the famous happenings and curious traditions " connected with Hyde Park. A list of trees, shrubs, and plants in Hyde Park is given in an appendix.
From the introduction:
Hyde Park. What a world of memories is suggested by the name. Standing right in the heart of London, it is almost the only surviving out-of-door public pleasure resort left in the West-End, wherein fashion may display itself and take exercise, since St. James's Park has now no social life, and Spring Gardens, Vauxhall, Old Ranelagh, and Cremorne are long since dead.
Gay as it is now in the season with its well-dressed saunterers, its beautiful equipages, its noble trees, and its wide expanse of water, it conjures up dark and evil memories, for the Park has been the scene of stirring events in our national history. Nor is its romantic mystery entirely of the past, even now. Surrounded by the palaces of the rich, the resort of the favoured ones of the earth, for whose wealth and ostentation it provides a fitting background; it forms also the refuge of the vicious and the destitute, and, alas, its greensward serves as the dormitory of filthy vagrants, whose very existence in this city of boundless wealth is an eyesore and a reproach.
There, vice and virtue still jostle each other, poverty and riches, greed and simplicity: there, every creed is expounded, every grievance aired, every nostrum advocated with violent vociferation hard by the spot where, upon the fatal Triple Tree of Tyburn, scores of miserable martyrs went to their doom for daring to put into words the thoughts that were their own. The Park now extends from Park Lane to Kensington Gardens, and from the Bayswater Road to Knightsbridge; but the creation of Kensington Gardens in the reign of George ii. — sheltering the Royal Palace where Queen Victoria was born in 1819 — robbed Hyde Park of 300 acres of land. Queen Caroline devoted much time and thought to the formation of the Serpentine and the beautifying of the surroundings of her Palace. Roughly speaking, Hyde Park is about 3^ miles round or covers an extent of 360 acres.
This is by no means enormous, not as large as the Bois de Boulogne in Paris, nor as wild as Their garden in Berlin, but there are trees in Hyde Park and Kensington Gardens which far surpass in bulk and beauty the trees of either of these Continental rivals. We have in Hyde Park none of the "ancestral statues " such as Berlin has to represent the noble army of the Kaiser's forebears.