Heralds of revolt; studies in modern literature and dogma 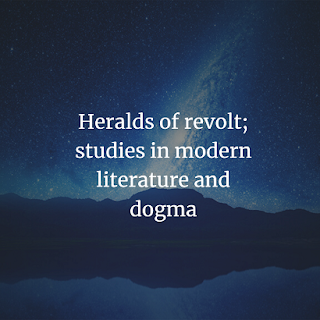 Preface.--I. The genius of George Eliot.--II. John Inglesant.--III. Carlyle.--IV. An apostle of Nirvana: H. F. Amiel.--V. Heinrich Heine.--VI. The modern French novel.--VII. French realism and decadence.--VIII. Pierre Loti.--IX. Neo-paganism.--X. Latter-day pagans.--XI. Friedrich Nietzsche.--Conclusion.--"The two standards."--Index of principal names
Excerpt:
The Essays contained in this volume the first four ^^^ have been taken from the Dublin Review, the remaining seven were published in the Quarterly Review. I desire to make fitting acknowledgement to the editors and proprietors of both magazines, by whose courtesy these pages are a second time at my disposal. Though none of them appeared during the days, now far off, when Dr William George Ward was in command of the Dublin, I cannot deny myself the pleasure of associating that brilliant and large-hearted memory with my selections from the Review in which I was first permitted to try my 'prentice hand. To Dr Ward, I owe a lifelong debt, which I have never forgotten.
since writing the above lines I have published in " Literary Lives " the volume on Ernest Renan which they promised. I now include, by way of a general introduction to these Essays, a chapter on " The School for Critics," dealing with Professor Saintsbury's " History of Criticism." This paper first appeared in the Quarterly Review, from which it is taken by the kind permission of the editor and publisher. And M. Zola is dead, owing to a tragic misadventure; Pierre Loti has drawn fresh pictures from his note-books of Jerusalem, Galilee, Egypt, and the singular " feminist " movement that is making itself felt in the hareems of the East; whilst M. Bourget in works like " Le Fantome " and " L'Etape " preaches against the aberrations of passion, the reign of divorce, and the declassement of individuals brought on by universal education.
Author: Rev. Dr William Francis Barry was a British Catholic priest, theologian, educator, and writer. He served as vice president and professor of philosophy at Birmingham Theological College from 1873 to 1877 and then professor of divinity at Oscott College from 1877 to 1880.
Publication date: 1909
Download 20 MB