Egyptian masonic history of the original and unabridged 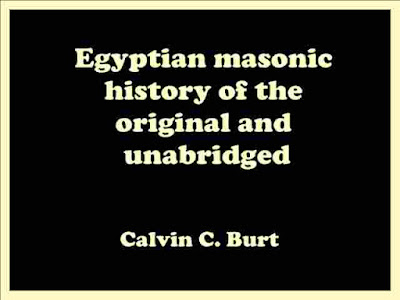 Egyptian masonic history of the original and unabridged ancient and Ninety-six (96 ⁰) Degree Rite of Memphis for the instruction and government of the craft.

From the introduction:
The Masonic History of the Original and Unabridged Ancient Ninety-Six Degree, (96°) Rite of Memphis; for the instruction and government of the craft for the entire civilized Cosmos, wherever the refulgent and beneficent rays of Masonic intelligence and benevolence is dispersed and the mystic art is tolerated Together with a history of this Ancient Order from its origin, through the dark ages of the world, to its recognition in Fiance and promulgation in Europe, and its final translation, establishment and enunciation in America, history of the formation of bodies, and record of the present Grand Body (or Sovereign Sanctuary) in 1867, with copies of charters and other correspondence of this Ancient and Primitive Rite, viz: the Egyptian Masonic Rite of Memphis: together with its Masonic Calendar and translation of the non-esoteric work.,
With the refusal of the Craft to accept of any reduction of degrees to thirty-three (33°,) and the consequent abrogation of the higher degrees above the 33° by the Seymour body, and the continuation of the old work, and formation of a new and original contribution of this Ancient and Egyptian Masonic Kite of Memphis, of Ninety-six degrees, a/nd no less number^ with a full history of the matter and documentary correspondence on this subject.
Issued and promulgated by this Sovereign Sanctuary, and only Grand Body in this Rite of the original 96 degrees in the world, from the 1st to the 96°, with a history of its present status and eminent membership, being the only true and original source of all mystic ceremonies and Masonic degrees, from which all other Kites, Societies and Associations have copied to a greater or less extent, and from which all other Masonic works are mere scintillations of the true light.
however, it is incumbent upon us, in our enquiries, to be humble in spirit — otherwise, we attain not to the practice of wisdom — (that divine and co-eternal principle, the greatest gift from God to man) — with due regard, also, and submission to those: Alutoi aporias — those " difficulties of hard solution" involved in the discussion.
We can assemble upon this common ground of human faculty by contributing to the great republican store of true literature, which is Wisdom — the endless legacy, the eternal possession of all mankind — co-partner with Faith itself — the parent of all our thoughts and faculties.