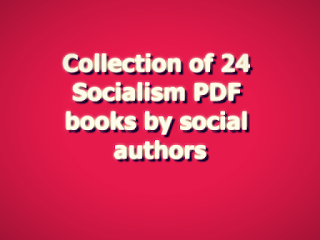 Socialism is an economic and political system where the state owns the means of production (i. e. farms, factories, tools, and raw materials.) ... Socialists believe that everything in society is made by the cooperative efforts of the people and citizens.
While the emergence of the Soviet Union as the world's first nominally socialist state led to socialism's widespread association with the Soviet economic model, some economists and intellectuals argued that in practice the model functioned as a form of state capitalism or a non-planned administrative or command economy Academics, political commentators and other scholars sometimes refer to Western Bloc countries that have been democratically governed by socialist parties such as Britain, France, Sweden and Western social-democracies in general as democratic socialist
(Wikipedia)
Socialists argue that the accumulation of capital generates waste through externalities that require costly corrective regulatory measures. They also point out that this process generates wasteful industries and practices that exist only to generate sufficient demand for products such as high-pressure advertisement to be sold at a profit, thereby creating rather than satisfying economic demand
Here is a collection of the best PDF socialism books by social authors that are in the public domain.