Animism, the seed of religion 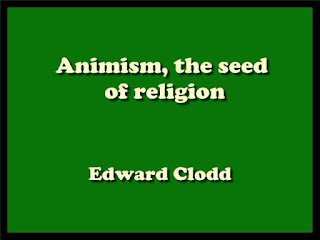 This little book contains more facts than a comment because of the departure from the ordinary handling of the subject of Primitive Religion which it makes demands that the presentment of evidence shall precede theories of Origins.
The interconnection between subordinate parts and the main theme has rendered it impossible to avoid here and there crossing the margins of areas that will come under survey in other volumes of this series.
Religion platitude, there is nothing like a definition. Perhaps most definitions hang between platitude and paradox. There are said to be ten thousand definitions of Religion." One of these is supplied by Parson Thwackum in Tom Jones. " When I mention religion, I mean the Christian religion, and not only the Christian religion, but the Protestant religion, and not only the Protestant religion but the Church of England." That easy-going cleric expressed what is in the minds of the majority of people when the word " religion " is used. He lived before the birth of the science of comparative theology; those who have applied its methods and profited from its results can pass in larger sympathy from specific creeds to partake of the universal spirit which every creed strives to embody.
To have done this is to have grasped the distinction between Religion and Theology, between what is fundamental and what is accidental, between that which is one in essence and abiding, and that which is manifold and fleeting. For religion was before all theologies, which are but concrete and partial aspects of it. It is before them all, being born of the emotions; and un-affected by them all, being independent of re-adjustments of creeds and dogmas.
In that storehouse of fact and suggestion, Primitive Culture, Dr Tylor remarks that " no religion He's in utter isolation from the rest, and the thoughts and principles of modern Christianity are attached to intellectual clues which run back through far pre-Christian ages to the very origin of human civilization, perhaps even of human existence."
One object of the present brief treatise is to pursue those clues still farther back, even beyond the human to the pre-human in the life history of our globe. Nearly every book on the Origin of ReUgion assumes a non-religious stage 1 Vol. i. p. 421. as preceding a religious stage in men's development, while many of them assume what are now known to be secondary stages as sole and primary.

14. Tree and Animal Worship ... 71
15. Stone Worship ..... 78
16. Water Worship ..... 82
17. Deification and Worship of Ancestors. 85
Bibliography 100
Edward Clodd was an English banker, writer, and anthropologist. He had a great variety of literary and scientific friends, who periodically met at Whitsunday gatherings at his home at Aldeburgh in Suffolk.
publication date:1904
Download Animism, the seed of religion zip contains PDF ebook 3 MB