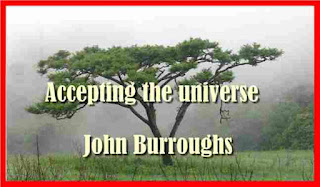 Awheel may have many spokes but can have but one hub. So I may say of this volume of mine that there are many themes and chapter-headings, but there is but one central thought into which they all converge, and that is that the universe is good and that it is our rare good fortune to form a part of it. As this collection of essays does not aim to be a systematic treatise on any one theme, but rather a series of sallies, excursions, into the world of semi-philosophical speculation, there is inevitably much repetition; there may even be some contradiction.
But I have concluded to let them stand, as I find myself an interested spectator of the workings of my own mind when, in following different roads, it arrives at the same truth. As all roads lead to Rome, so in the realm in which my mind works in this volume, all roads lead to the conclusion that this is the best possible world, and these people in it are the best possible people.
The heart of Nature is sound. I feel toward the great Mother somewhat as a man does who takes out a policy in an insurance company: he believes the company is solvent and will meet its obligations. I look upon the universe as a solvent and worthy of trust. In other words, this is a book of radical optimism. It might be described as an attempt to justify the ways of God to the man on natural grounds. My reader need hardly be told that theological grounds do not count with me.
I want nothing less than a faith founded upon a rock, faith in the constitution of things. The various man-made creeds are fictitious, like the constellations — Orion, Cassiopeia's Chair, the Big Dipper; the only thing real in them is the stars, and the only thing real in the creeds is the soul's aspiration toward the Infinite. This abides, though creeds and dogmas change or vanish,

I Shall we Accept the Universe? 3
II. Manifold Nature 19
III. Each for its Own Sake 30
IV. The Universal Beneficence 54
V. The Good Devils 73
VI. The Natural Providence 90
VII. The Faith of a Naturalist 112
VIII. A Fallacy made in Germany 134
IX. The Price of Development 138
X. Tooth and Claw 158
XI. Men and Trees 173
the book details : Download Accepting the universe PDF ebook