With the poets: a selection of English poetry 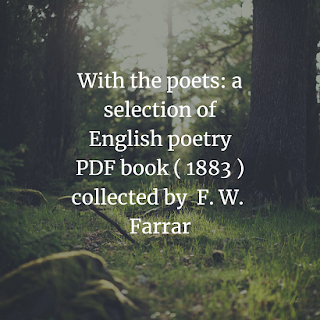 When asked to prepare a manual of English poetry, my only hesitation arose from the number and the excellence of the collections which are already in existence. It is not long since the Archbishop of Dublin published his Household Book of English Poetry, and the late Mr Emerson his Parnassus; and though more than twenty years have elapsed since the publication of Mr Palgrave's Golden Treasury, that little volume is still exceedingly precious to all lovers of Songs and Lyrics.
My hesitation was removed when I considered that the plan here adopted differs in some respects from that which is found in most other selections, and still more when I remembered the deep pleasure which thousands of readers have derived from multitudes of different volumes of the same character with this. In my own school days, it was part of our weekly work to learn by heart a certain amount of English poetry, and an Anthology was put into our hands for this purpose. The book has probably long been out of print, nor had it any very pre-dominant claims to attention. It admitted many poems by writers altogether unknown or long forgotten, and while it made room for some passages of only tenth-rate excellence it excluded others of the supremest merit. Yet I can testify that the little volume gave no small amount of innocent pleasure to many boys and that the impressions left by frequent reading of the passages there collected formed a valuable part of my own early education.
Some contents:
Geoffry Chaucer. The Squier 29
The Person 30
Constance and her Child 31
The Last Verses of Chaucer 32
Edmund Spenser.
Una and the Red Cross Knight. . . 34
The Ministry of Angels 36
The Bower of Bliss 37
Epithalamion 37
William Shakespeare.
Speech of Ulysses to Achilles 40
Mercy 41
Music 42
Sleep 43
Flowers 43
Cleopatra's Barge 44
Cupid 45
Sonnets 45
Dirge 47
MINOR POETS OF THE SIXTEENTH CENTURY.
Sir Philip Sidney. Sonnets
Christopher Marlowe. The Passionate Shepherd to his Love 49
Sir Walter Raleigh.
Reply to Marlowe's " The Passionate Shepherd to his Love" 50
Lines supposed to be written the night before his execution 50
Sir Edward Dyer. My Mind to me a Kingdom is 51
Michael Drayton. The Battle of Agincourt 52
Beaumont and Fletcher.
A Sad Song 54
From ' ' An Honest Man's Fortune." 54
Lines on the Tombs of Westminster Abbey 54
Joshua Sylvester. A Contented Mind 55
Seventeenth Century.
John Milton.
Soliloquy of Satan 56
Satan 57
Address to Light
the book details : Download 12.3 MB