The poets of modern France 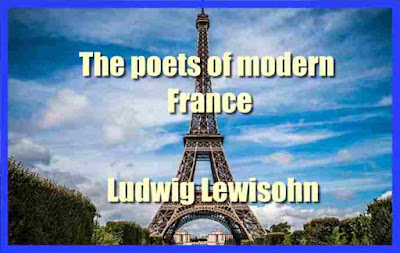 It is time that the art of translation, of which we have many beautiful examples in English, should be strictly distinguished from the trade. Like acting or the playing of music, it is an art of inter-predation, more difficult than either in this respect: that you must interpret your original in a medium never contemplated by its author.
It requires, at its best, an exacting and imaginative scholarship, for you must understand your text in its fullest and most living sense; it requires power over the instrument of your own language no less complete than the virtuoso's over the pianoforte than the actor's over the expression of his voice or the gestures of his body.
Its aim, too, is identical to the aims of those sister arts of interpretation: to give a clear voice to the beauty that would else be dumb or quite muffled. For even to intelligent lovers of the arts a subtle or intricate poem v in a language not their own is as lifeless as a page of Beethoven which they have not heard played.
For my critical introduction to the poets of modern France, I have no such apology to make. Critics of power and place have told me repeatedly how wrong-headed my critical method is. Let me remind them, who know it so much better than I, of the history of literature and of criticism. For if that history makes but one thing admirably and indisputably clear it is this: In every age, the New Poetry and the New Criticism have prevailed in so far as they produced excellent work according to their own intentions and in harmony with their own aims.
In every age, the critical conservatives have protested in the name of eternal principles which, alas, are not eternal at all. And generally, for such is human nature, the innovators in art and thought of one generation, of one decade at times, have become the conservatives of the next. In another ten or fifteen years I may myself be frowning upon a still newer criticism, a still newer art.
But today I am in the right, not of my own desert, but through the ways of the World Spirit.
The struggle of man, however blind and stumbling, however, checked by tribal rage and tribal terror is toward self-hood. This truth is superficially assented to, it has become a glib commonplace to the sociologist: it has really penetrated only a few rare and lonely minds.
The majority, simple and learned, talks of individualism and cries out upon the plainest implications of its own doctrine.
Not only in life, but also in art. Yet the history of literature, and especially of poetry, illustrates nothing in the history of the mind longing for more beauty, the exaltation in truth, the vision of the tragedy of life arise, in the fullest sense, only when the individual liberates himself from the tribe and faces the universe alone. Tribal lays, still largely communal in diction arid metre, receive — as in the Odyssey or the Nibelungenlied — an immortal accent from the voice of a nameless personal redactor and the rude legends of the Latian tribe from the melancholy beauty of Vergil's soul.
The metrical romances of the Middle Ages, on the contrary, are scarcely distinguishable one from the other, and even so cultivated an age as the Renaissance illustrates in its faded sonnet cycles the dominance of a tribal convention. Such verse becomes strangely hushed and inarticulate in the course of time. We Hsten for the voice of a man and hear the murmur of the tribe.
the book details : Download 8.9 MB