The beautiful and damned by F. Scott Fitzgerald 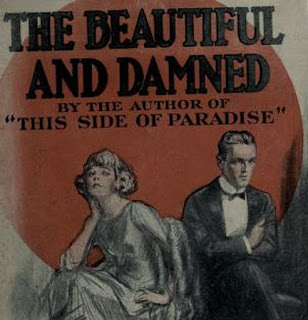 The Beautiful and Damned, first published in 1922, is F. Scott Fitzgerald's second novel. It explores and portrays New York cafe society and the American Eastern elite during the Jazz Age before and after "The Great War" and in the early 1920s. As in his other novels,
Fitzgerald's characters in this novel are complex, especially with respect to marriage and intimacy. The work is generally considered to have been drawn upon and be based on Fitzgerald's relationship and marriage with his wife Zelda Fitzgerald.
Review by Tom
"The Beautiful and Damned" is the perfect title for this novel, as well as for the author's life with his wife Zelda. This is Fitzgerald's second novel, and he had become wealthy and famous. His protagonist and his wife--Anthony and Gloria Patch--move in a circle of rich, hard-drinking sybarites, who seem to move glibly from party to party. (On the first edition dust jacket, Anthony and Gloria are painted as Scott & Zelda)