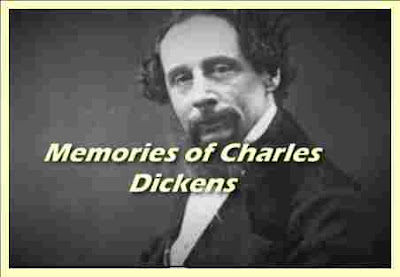 Memories of Charles Dickens, with an account of "Household Words" and "All the year-round" and of the contributors thereto

An illustration of Dickens most interesting character, to give a special series of domestic pictures and sketches of him
It may seem a bold thing to say and self-delusion, but I doubt if among all the existing records of Dickens's domestic life — and they are many — there will be found any that give such a picture of his character and manners in private life as is to be found in the sketches that follow. They are " intimate " as well as observant.
Forster wrote officially, and in his stately way " put behind him " all mere domestic details as highly trivial. Others, such as my friend Marcus Stone, have not been " trained to the pen," to the difficulties of noting traits of character, though orally no one could exceed him in his warm, genuine portraitures of his friend. Mine, I say unaffectedly, is the truest picture existing of the man because I have long been well schooled to observe shades of character, emotions, and feelings, as well as to record.
Again, then, I could almost venture to say, in a certain sense and to a certain degree, I was more privileged than others with a deal of his engaging confidence, a thing delightful now to think of. He was always pleased to unfold himself to me with gay freedom and humour, chiefly, I really believe because I somehow contrived to touch old sympathies of his to which he found others not responsive because they did not understand him, but which to him were the most sacred things. The note of " childhood " and its recollections, so precious to him, can be traced in all directions, and the sympathy shown by another for this tender penchant of his was, I firmly believe, the cause of his indulgence to myself.
I propose, in illustration of his most interesting character, to give a special series of domestic pictures and sketches of him, which I think has not been done hitherto to any extent. It will be seen presently that I was a privileged person in many ways, and that to me he showed many facets of his delightful nature, and of which there is no record to be found elsewhere. I see no reason why I should not strive to increase general love and admiration by setting these sketches before the public.
the book details : Download Memories of Charles Dickens 8.9 MB - PDF ebook