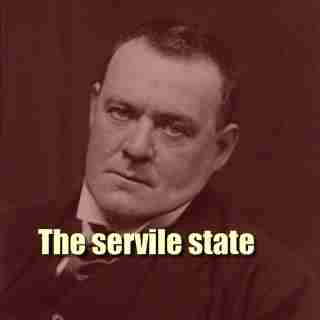 The Servile State is a 1912 book authored by Hilaire Belloc. The book is primarily a history of capitalism in Europe and a repudiation of the convergence of big business with the state. Belloc lays out two alternatives: distributism and collectivism.
from the preface
of this book, the author may perhaps be excused for adding, by way of Preface, a few words upon the thesis it maintains and the method through which that thesis is treated. It appears the more necessary to do so because a careful comparison of the reviews and other expressions of opinion which it has received convinces the author that parts of his argument are liable to misconception. It would be a pity to correct such misconception by any changes in a completed book; a few words set down here by way of Preface should be sufficient for the purpose.
First: I would point out that the argument contained in the book bears no relation to the common accusation levelled against Socialists (that is, Collectivists) that life in a Socialist State would be so subject to regulation and order as to be unduly oppressive. With this common objection to the reform advocated by Socialists I have nothing to do in this book, nor can it touch my subject at any point. This book does not discuss the Socialist State.
Indeed it is the very heart of my thesis that we are not, as a fact, approaching Socialism at all, but a very different state of society; to wit. a society in which the Capitalist class shall be even more powerful and far more secure than it is at present: a society in which the proletarian mass shall not suffer from particular regulations, oppressive or beneficent, but shall change their status, lose their present legal freedom, and be subject to compulsory labour. Next, I would beg my readers to believe that I have not attempted to set up this thesis as a warning or as a piece of gloom. I say nowhere in the book that the re-establishment of slavery would be a bad thing as compared with our present insecurity, and no one has a right to read such an opinion into this book. On the contrary, I say clearly enough that I think the tendency towards the re-establishment of slavery is due to the very fact that the new conditions may be found more tolerable than those obtained under Capitalism.
Which state of society might reasonably be preferred — the re-establishment of slavery or the maintenance of Capitalism — would make an ample subject for another book: but that alternative does not concern this volume or the thesis therein maintained. Finally, I would beg such of my readers as are Socialist by conviction not to misconceive my opinion upon what their movement is affecting. The most sincere and the best writer among the English Socialists wrote of this book that the author had mistaken the "Social Reform" of the professional politicians for Socialism, and that while this "Social Reform" might be tending towards the re-establishment of compulsory labour for the benefit of an owning class, yet Socialism had no such intention or tendency.
Publication date: 1912
Download The servile state PDF ebook
Next Post Previous Post
No Comment
Add Comment
comment url
History,Political