The founders of geology by Archibald Geikie  ( 1897) 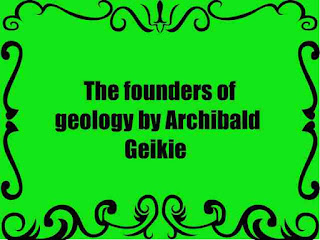 The narrative thus proposed was made the subject of six lectures which were published in the summer of 1897 as a small volume entitled The Founders of Geology. This work has been for some time out of print. In preparing a new edition 1 has departed from the original form of lectures, and from the restricted treatment of the subject which a short course of lectures necessarily involved.

While retaining and also enlarging the more detailed discussion of the remarkable period embraced in the original lectures, I have given a sketch of the earlier progress of geological ideas, from the times of ancient Greece onwards to the epoch that formed the starting point of my former volume. In this extension of the subject,

I have adhered to my original plan of tracing the origin and slow development of geological science, rather in an account of the careers of a few of the chief leaders by whom the progress has been mainly effected, than in an attempt to summarise also the work of their less illustrious contemporaries. Since the publication of the first edition, my lamented friend the late Professor Zittel of Munich published (1899) his Geschichte der Geologie und Paldontologie — a work of extraordinary labour, fullness, and accuracy, with which no student of geology who cares to know the history of his science can dispense.

An excellent abridged English translation of this voluminous treatise has been prepared by Mrs Ogilvie Gordon. The scheme of treatment adopted by Professor Zittel, however, differs so much from that which I have followed that our two volumes may be regarded as in large measure supplementary to each other. While he has noted the contributions of all who have in any important way advanced general or local geology, I have selected for fuller consideration chiefly the lives and work of some of the masters to whom we mainly owe the foundation and development of geological science.