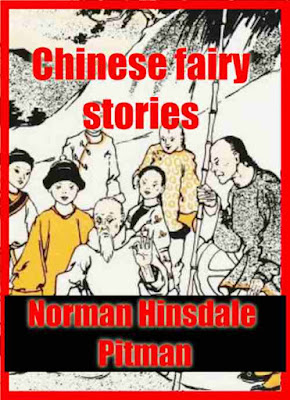 Yow-to's first lesson -- The boy who slept -- The boy and the porridge -- The gods know -- Lo-sun, the blind boy -- Sibg Li's fortune -- Fairy Old Boy and the tiger -- Yu-kong and the demon -- The boy who became emperor -- The ashes of deceit -- The bride of the dragon king
Excerpt from Yow-to's first lesson
Long, long ago, not far from the Yellow River, lived a little boy whose name was Yow-to. His father owned a fine pear orchard, famous for its fruit, which for several years brought to the family a comfortable living.
Up to the time of Yow-to's birth, it had been a great sorrow in the hearts of his parents that the gods had denied them a son.
Again and again, they had bewailed their grievous lot, and burned incense in the village temple, offering up prayers to their idols to be spared the curse that would befall them if no son were born into their family.
One would think they might have been satisfied with the five rosy-cheeked little daughters who filled their home with sunshine. But no indeed, as each successive girl child came to their home their sadness had grown deeper and deeper until at last, they were in despair. Like all their neighbours they felt that one boy was worth a dozen girls; for was not each girl almost a useless burden upon the
family?
As soon as they were grown, would they not be married and go into another household to work for other people? On the contrary, a son would continue to live at home and work for his parents as long as they lived, and he would be useful in many other ways.
So great became the desire of this unlucky couple to be blessed with a little boy, that one day in the temple the mother offered publicly to repair at her own expense one of the dingy old dust-covered idols if the gods would grant her what she asked.
Whether the grimy god understood Mrs Wang's promise we shall not say, but certain it is that a few months later little Yow-to came to gladden the hearts of his parents. It was not until a year after his coming, however, that they gave him the name by which we shall call him in this story. On his first birthday, according to Chinese custom, just before the feast was given in honour of the glad occasion, the baby was dressed in the new clothes presented by his grandmother. Then he was seated upon a bamboo sieve that had been placed in readiness on a table. Many objects were put within his reach, among them a book, a brass mirror, a set of money scales, a money counter, a pen, an ink slab, a knife, gold ornaments and fruits.
Near the table stood the proud mother and father watching eagerly for the infant's first desires. The five sisters, the grandparents, and the other relatives also waited nearby. All were anxious to see which one of the many new playthings about him the child would seize on for his first toy. By this means, according to their belief, they could foretell his future. If he grasped the book or the pencil, doubtless he would become a famous scholar; if the counting frame, the scales, or the gold ornaments, a man of wealth; if the knife, a warrior; if the fruit, a farmer.
the book details : Download  Chinese fairy stories  3.7 MB