Accidence of Hebrew grammar: with exercises 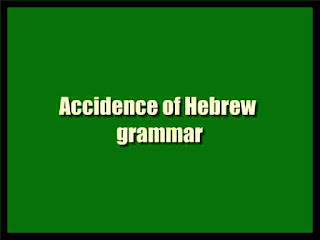 The plan, therefore, has been to insist mainly on the verbs and to explain the elements only as they are needed for immediate use in the paradigms, introducing other portions of the accidence at the point where they seemed to fit in best or were required for the exercises or where it was desired to dwell for a longer time on the verb that is being studied. The whole question of half-open syllables and intermediate she has been left untouched. The avoidance of the needless confusion and discouragement they cause was thought sufficient warrant for omitting what for the present are at best matters of uncertainty.

The same motive will also explain the absence of certain other technicalities in pronunciation and transliteration. The exercises are based entirely on the selections from Holy Scripture that are placed at the end. They will therefore serve at the same time as a matter for drill and as a preparation for reading, while the same word list will suffice for both. In con- nection with the exercises some short rules of syntax have been inserted.

Owing to the brevity and fewness of the selections a certain sameness in the exercises was almost unavoidable. But it is hoped that whatever drawbacks result from confining them to SO narrow a range will be more than compensated for by the advantages gained. For after the elements have been mastered by their aid and the selections themselves have been studied, the student will be in possession of a considerable vocabulary, will be familiar with the more regular forms of the Hebrew sentence and so will find himself fairly well equipped to proceed with the ordinary aids to do his part " lest that precious heavenly treasure of sacred books which the Holy Ghost has so munificently bestowed upon men lie neglected."