The Concept Of Mind 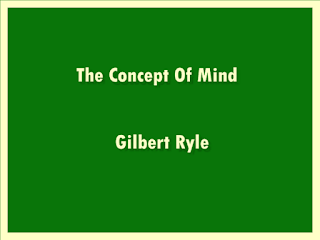 The Concept of Mind is a 1949 book by philosopher Gilbert Ryle, in which the author argues that "mind" is "a philosophical illusion hailing chiefly from René Descartes and sustained by logical errors and 'category mistakes' which have become habitual."[1] The work has been cited as having "put the final nail in the coffin of Cartesian dualism,"[2] and has been seen as a founding document in the philosophy of mind, which received professional recognition as a distinct and important branch of philosophy only after 1950
Ryle's Superficial Behaviorism There are only two things wrong with Ryle's critique of the dogma of the ghost in the machine: the mind is not a ghost and the human body is not--in any useful sense--a machine. The concept of a ghost is that of a deceased--i.e. disembodied--person who has been given (temporary) power to interact with living--i.e. embodied--persons for reasons known only to the higher, power-granting power. The concept of mind, on the other hand, is the concept of some indefinite part of a person's body that thinks and acts in a socially acceptable way.
Clearly, having and using a body is crucial to the concept of mind, whereas a ghost is by definition an incorporeal entity. A person can lose his mind, be out of his mind, mind his own business, and bear things in mind, but he can do none of these things without a body. By the same token, a horse can have a mind of its own, and the supercomputer Watson is said to have taught itself to think, so having a mind is perhaps a necessary though not a sufficient condition for being a person. The point is that the concept of mind and the concept of a ghost are--as the grammar indicates--two closely related but entirely different concepts and that the concept of a person is fundamental to each.
Ryle, though he uses the word 'person throughout his critique, never addresses the logical grammar of personhood. Now with respect to the human body being a machine, somebody needs to issue a recall. Though wonderfully complex in its myriad systems and subsystems, the human body--like all organisms--is designed by nature for one purpose and one purpose only, to survive long enough to reproduce itself and then die. What machine ever made was designed and built for the sole purpose of replicating itself and then destroying itself? Accomplished physiologist though he was, Descartes could not be blamed for comparing the anatomical intricacies of the body to a subtly designed machine and missing the larger biological point that was to follow two hundred years later. In sum, Ryle's critique of Descartes not only misses its mark but is guilty of the same conceptual confusion with which it charges its target.
Download