The book of life 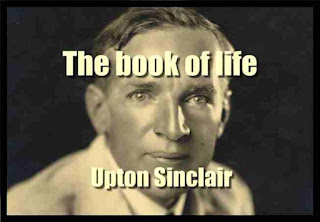 From the book's introduction:
The writer of this book has been in this world for some forty-two years. That may not seem long to some, but it is long enough to have made many painful mistakes and to have learned much from them. Looking about him, he sees others making these same mistakes, suffering for lack of that same knowledge that he has so painfully acquired.
This being the case, it seems a friendly act to offer his knowledge, minus the blunders and the pain. There come to the writer literally thousands of letters every year, asking him questions, some of them of the strangest. A man is dying of cancer, and do I think it can be cured by a fast?
A man is unable to make his wife happy, and can I tell him what is the matter with women? A man has invested his savings in mining stock, and can I tell him what to do about it? A man works in a sweatshop, and has only a little time for self-improvement, and will I tell him what books he ought to read? Many such questions every day make one aware of a vast mass of people, earnest, hungry for happiness, and groping as if in a fog.
The things they most need to know are not taught in the schools, in the newspapers, they read, nor in the church they attend. Of these agencies, the first is not entirely competent, the second is not entirely honest, and the third is not entirely up to date.
Nor is there anywhere a book in which the effort has been made to give to everyday human beings the everyday information they need for the successful living of their lives.
The writer of this book spent nine years of his life in colleges and universities; also he was brought up in a church. So he knows the orthodox teachings, he can say that he has given to the recognized wise men of the world every opportunity to tell him what they know.
Then, being dissatisfied, he went to the unrecognized teachers, the enthusiasts and the "cranks" of a hundred schools. Finally, he thought for himself; he was even willing to try experiments upon himself. As a result, he has not found what he claims is the ultimate or final truth; but he has what he might describe as a rough working draft, a practical outline, good for everyday purposes. He is going to have confidence enough in you, the reader, to give you the hardest part first; that is, to begin with, the great fundamental questions.
What is life, and how does it come to be? What does it mean, and what have we to do with it? Are we its masters or its slaves? What does it owe us, and what do we owe to it? Why is it so hard, and do we have to stand its hardness? And can we really know about all these matters, or will we be only guessing? Can we trust ourselves to think about them, or shall we be safer if we believe what we are told? Shall we be punished if we think wrong, and how shall we be punished?
Shall we be rewarded if we think right, and will the pay be worth the trouble? Such questions as these I am going to try to answer in the simplest language possible. I would avoid long words altogether if I could, but some of these long words mean certain definite things, and there are no other words to serve the purpose.
You do not refuse to engage in the automobile business because the carburettor and the differential are words of four syllables. Neither should you refuse to get yourself straight with the universe because it is too much trouble to go to the dictionary and learn that the word "phenomenon" means something else than a little boy who can play the piano or do long division in his head?

CHAPTER I. THE NATURE OF LIFE 3
Attempts to show what we know about life; to set the bounds of real truth as distinguished from phrases and self-deception.
CHAPTER II. THE NATURE OF FAITH 8
Attempts to show what we can prove by our reason, and what we know intuitively; what is implied in the process of thinking, and without which no thought could be.
CHAPTER III. THE USE OF REASON 12
Attempts to show that in the field to which reason applies we are compelled to use it, and are justified in trusting it.
CHAPTER IV. THE ORIGIN OF MORALITY 17
Compares the ways of Nature with human morality, and tries to show how the latter came to be.
CHAPTER V. NATURE AND MAN 21
Attempts to show how man has taken control of Nature and is carrying on her processes and improving upon them.
CHAPTER VI. MAN THE REBEL 27
Shows the transition stage between instinct and reason, in which man finds himself, and how he can advance to a securer condition.
CHAPTER VII. MAKING OUR MORALS 31
Attempts to show that human morality must change to fit human facts, and there can be no judge of it save human reason.

CHAPTER VIII. THE VIRTUE OF MODERATION 37

Attempts to show that wise conduct is an adjustment of means to ends and depends upon the understanding of a particular set of circumstances.
Publication date: :( 1922)
Publisher Chicago: The Paine Book
Download The book of life - PDF ebook by Upton Sinclair