The elixir of life: or, 2905 A.D.; a novel of the far future by Herbert Gubbins Free PDF novel 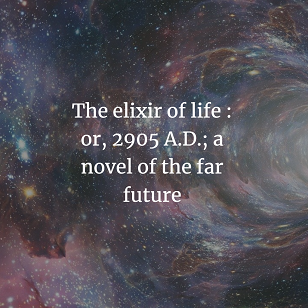 This novel was published in 1914

A description of the future world and its scientific wonders by a scientist who sleeps 1000 years.

Excerpt from the preface:

This is an age of inventions with a negative nomenclator. The horseless carriage is followed by wireless telegraphy. Yet many people will not be convinced of a new invention till it has become commonly known, and then they merely say: "I should not have thought it could have been possible." When Lavoisier heard of meteorites falling from the sky, he said this could not be, as there were no stones in the sky.


Only eighty- years ago scientific men in England proved to their own entire satisfaction that the notion that railway trains would someday be able to travel at the rate of thirty miles an hour was preposterous. When Simpson discovered the properties of chloroform, Majendi, an almost equally illustrious man, all but declared the great Scottish physician to be a charlatan. The telephone, according to a French- man, supposed in his time to be the great authority on such matters, was said to be merely a species of ventriloquism.

To come nearer to the present day, many will no doubt recall how, only a few years ago, it was day after day laid down in the Press that the submarine boat, which has already revolutionized naval tactics, was an absolutely inoffensive weapon in practice. Thus it has ever been with each new advance made by human ingenuity.