Paradoxes of nature and science (1906) by William Hampson (with illustrations) 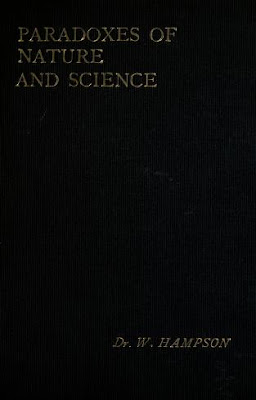 Things which appear to contradict general experience or scientific principles, with popular explanations of the how and why


NATURE is a great conjurer. With many of her tricks, we are so familiar that they do not astonish us; but on giving them a little consideration we often find that they are really very puzzling performances, and we become as eager to learn the explanation as children at a Christmas conjuring party to hear the per- former's account of how he does it, or children of an older growth to learn from the political prestidigitator at the head of the opposite party how he reconciles his action with his principles. Equally interesting puzzles occur in the course of experimental work in the laboratory; but in this book, the choice will be limited, so far as is reasonably possible, to such experiments as can be readily performed, with very simple apparatus, at home; and the form of. experiment illustrated will often depend on the fact that this object is in view. In both kinds of paradox, the desire to gratify curiosity by seeking the explanation will promote an interest in the intelligent study of the workings of natural forces; and this is no less truly the study of science than much of the rote-work for examinations which is done under that name.