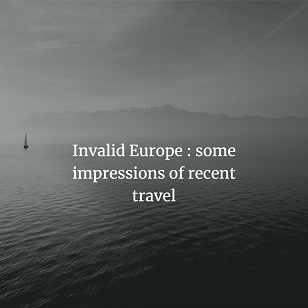 I had left America towards the end of June, most anxious to see for myself conditions in Western Europe, where I had not been since the Fall of 1914, after having passed the first months of the great war in Paris, the South of France and Italy.

From the latter country, I had been fortunate enough to travel in comfort to my native shore at a time when many Americans were stranded in other countries or were experiencing the greatest difficulty in obtaining decent accommodations at fabulous prices.

Like many of my countrymen, I had for many years prior to the war passed my summers abroad, while up to my twentieth year I had lived chiefly in Europe, where, in consequence of my father's premature death abroad, my family had settled. My preliminary education I had received in German schools, and I was fortunate enough to become well acquainted with the languages, customs, and viewpoint of the western part of the European continent. In fact, when I returned to my native country and entered an American college, my mind and habits had become Europeanized to an extent which would scarcely be approved by the average American patriot.