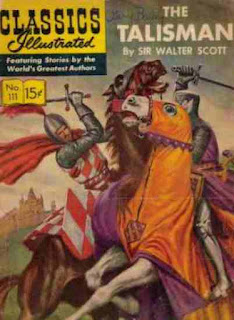 The Talisman takes place at the end of the Third Crusade, mostly in the camp of the Crusaders in Palestine. Scheming and partisan politics, as well as the illness of King Richard the Lionheart, are placing the Crusade in danger.
The main characters are the Scottish knight Kenneth, a fictional version of David of Scotland, Earl of Huntingdon, who returned from the third Crusade in 1190; Richard the Lionheart; Saladin; and Edith Plantagenet, a relative of Richard. Other leading characters include the actual historical figure Sir Robert de Sablé
The One To Ever Serve As The Eleventh One To Be Known As The Grandmaster Of The Order Of The Knights Templar/The Grandmaster Of The Templar Order and as well as Conrad Aleramici da Montferrat/Conrad Aleramici di Montferrat/Conrad Aleramici de Montferrat, referred to here whilst as “Conrade of Montserrat”, due to an admitted misspelling on The Author Sir Walter Scott’s respective part.