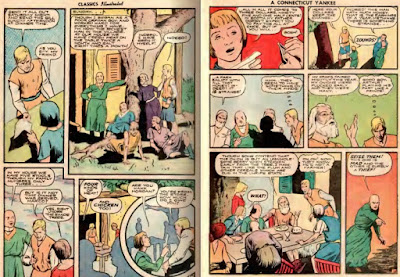 In the book, a Yankee engineer from Connecticut named Hank Morgan receives a severe blow to the head and is somehow transported in time and space to England during the reign of King Arthur. After some initial confusion and his capture by one of Arthur's knights, Hank realizes that he is actually in the past, and he uses his knowledge to make people believe that he is a powerful magician. He attempts to modernize the past in order to make people's lives better, but in the end, he is unable to prevent the death of Arthur and an interdict against him by the Catholic Church of the time, which grows fearful of his power.
Wikipedia