A dictionary of Oriental quotations (Arabic and Persian) 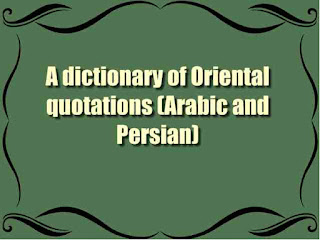 The book contains great sayings from Arabic and Persian sayings with translations
In presenting these specimens from the still hitherto largely unworked mines of the Orient, the compiler desires to thank warmly the following Oriental scholars who have allowed him to make use of their translations: Sir C. J. Lyall, K.C.S.I., Professor Margoliouth of Oxford, Professors Browne and Nicholson of Cambridge, Mr Whinfield, and the owners of the copyright of the late Col.
Wilberforce Clarke's works. He also wishes to thank Messrs. Kegan, Paul, Trench & Co. for allowing him to quote from Redhouse's translation of the Masnavi and Bicknell's translation of Hafiz, and Mr T. Fisher Unwin for permitting quotations to be made from Professor Browne's Literary History of Persia.
transliterating Arabic the compiler has adopted the system of Professor Palmer in his Arabic Manual. In transliterating Persian he has for the most part adopted that of Mr Tolbort in the Persian translation of " Robinson Crusoe."

Example:
' Agar za bagh-i-r'asryat malak khiirad sebi Bar aurand ghvilaman-i-u darakht az bekh Ba nim baiza ki sultan sitam rawa darad Zanand laskarianash hazar murgh ba sekh."
" If but one apple from the peasant's field The king should eat, his men uproot the tree; 'And does the Sultan but his sanction yield To extort five eggs — his followers will see Cause with a thousand pullets to make free."