The machinery of Wall Street 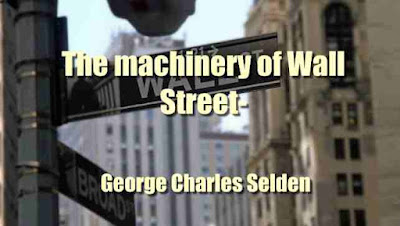 why it exists, how it works and what it accomplishes

To most people, the machinery of Wall Street seems intricate and mysterious. There is probably no part of the business activities of the country that is so much misunderstood. The popular idea of Wall Street picked up from miscellaneous sources, such as newspaper headlines, cartoons, magazine stories and moving pictures, seems to embrace a hodge-podge of corpulent, side-whiskered bankers surrounded by champagne bottles, haggard speculators bending feverishly over stock tickers, habitually risking their last dollar and generally losing it,
Mephisto-like manipulators are always determined to ruin each other or be ruined in the attempt, and child-like young gamblers whose touching confidence in human nature leads them to risk their widowed mothers' patrimonies in a single throw on any "tip" which may be offered them.
To the man who is earning his livelihood day by day in the clock-like, well-ordered, efficient business life of the Street, these popular ideas seem so absurd that he thinks they must be mythical. It is only when he leaves his habitual haunts and mingles with the people on the farms, in the stores and in the factories that he awakes with a start to the monumental ignorance of the public in general about the things that seem to him nothing but daily business routine. But while the details of the machinery of Wall Street are complicated, just as are the de- tails of the steel industry or boot and shoe manufacturing or any other specialized department of modern life, its main features and purposes are comparatively simple and very interesting.
Why a Wall Street? Why do we need a Wall Street? For it must be that we do need it or we should not have it. Nothing could call it into existence except a demand of some sort for the services rendered. To start at the beginning, it is, as all the economists tell us, division of labour that permits and to a great extent causes the advance of civilization.
So long as each individual grows for himself or makes for himself everything that he needs, he is a slow and clumsy producer. He has to do everything on such a small scale that he can make use of no machinery and only of the simplest tools. He has little chance to rise above the standard of living of a savage.

I. Why Do We Need a Wall Street? ... 7
II The Banks Bank Statement Clearing
House Sub-Treasury 21
III The Money and Credit Markets .... 34
IV Foreign and Domestic Exchange Balance
of Trade 46
V The Corporation as an Element in Wall Street 57
VI The Bond Market 71
VII How Business Is Done on the Stock Exchange 82
VIII How Business Is Done on the Stock Exchange (Continued) 93
IX Inside the Broker's Office 106
X Broker and Customers The Unlisted Market 117
XI The Curb Market Private Bankers ... 129
XII The Promoter Underwriting Syndicates. 141
XIII Distribution of News and Quotations. 153
XIV Theory of Speculation Speculative Terms. 166