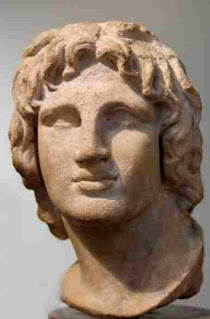 The next year (1890), Theodor Noldeke published his study of the Alexander Romance, much of which was based on the Syriac version newly available in Budge’s edition. In this he also devoted a few pages to the Alexander Legend, arguing that it was, in fact, the source for an episode in The Qur'an, specifically the Qur'an story of DhQ l-Qarnayn (Q 18:83-102).
He stated that the Alexander Legend must have been transmitted orally to Muhammad along with the other ancient biblical and traditional stories circulating in the environment of Mecca.
To prove this relationship Noldeke indicated a few specific, important elements of the story of Alexander’s journeys appearing in both the Syriac Alexander Legend and the Qur’an. In the century since then, his discovery seems to have become almost forgotten in Qur’anic studies.
For example, the recent Encyclopaedia of the Qur'an article “Alexander” does not even mention the Syriac Alexander Legend or Noldeke’s thesis on the matter, though there could be no more appropriate place for it.
Moreover, some recent scholarship has brought considerable confusion into the study of Alexander's stories in relation to the Qur’an.
The subject, therefore, deserves to be revisited. As I hope to show, it still has much more to offer than even Noldeke expected.


The present investigation will first show that Noldeke was basically correct in his view: the Qur’an 18:83-102 is a retelling of the story found in this particular Syriac text. But that is just the beginning of the matter. Recent publications by scholars of Syriac and Greek apocalyptic texts of the early seventh century, especially several articles by G.J. Reinink, offer a precise understanding of the context in which this Syriac Alexander Legend was composed and its political and religious purposes in that context. These studies make it possible to shed new light on the use of the Alexander Legend's story in the Qur’an and on the concerns of Muhammad’s community.
Furthermore, once the affiliation of the Arabic and Syriac texts is established and the character of that affiliation is identified, it is possible to demonstrate (perhaps unexpectedly) the reliability of the traditional lexicography as well as the soundness of the Arabic text of this Qur’anic passage. All of these matters will be discussed later.