How to know people by their hands 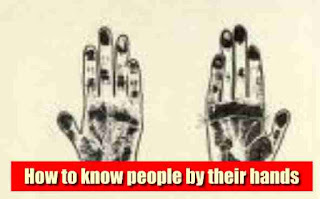 From Introduction:
Some time ago there was an eclipse of the sun. To study this phenomenon, scientific expeditions began to gather their equipment many months in advance. They knew what instruments would be needed, where to go for their observations and the exact moment when the event would take place. This eclipse was foreseen even before the birth of the scientists taking part in the expeditions.
Was this a case of clairvoyance penetration of the future by some gifted seer whose word was accepted by modern scientists as sufficient reason to send them voyaging thousands of miles? Not at all. Test tubes and mathematical formulae breed men from Missouri who want to be shown.
They would certainly not have accepted the word of inspiration on this subject any more than they would have taken a mad Adventist's forecast of the world's end. Yet they, and millions of others, accepted detailed predictions of the exact path the obscuring shadow of the moon would take. So, in other fields of science, has prediction become a matter of course.
Chemists will tell you in advance the reaction to be obtained by combining two substances. Physicists will explain how soon and where a projectile, shot from a certain place, will hit. Engineers will inform you how many revolutions per minute to expect from a wheel as the power applied is increased or decreased. In less learned circles, everyone is willing to embark on limited predictions about the everyday occurrences of our lives. We take for granted that night will be followed by morning.
We assume that when we apply a match to an open gas jet the gas will ignite. We are not surprised when we drop a pencil to see it fall to the ground. Quite clearly, we translate a repeated occurrence into a prediction of its continuance. The scientist does not go that far. His predictions are based on involved calculations making use of past observations.
In theory, he is not so certain even as you that the sun will rise tomorrow, for his mathematical formulae express only the probability of such an event, not its certainty. Theoretically, his statistics give him nothing but the betting odds for and against. In practice, however, he is able to figure the exact shift from yesterday's path, both in time and position, by which tomorrow's sunrise will differ from yesterday's.
What I am trying to say is that the scientist, though he lays no claims to an ability to make certain predictions, actually does make predictions daily and has them accepted as valid both by his colleagues and by the general public. Strangely enough, the one subject which scientists have not brought into conformity with their formulae of statistical averages is man himself.
By and large, man is completely unpredictable to himself. Man's own activities, his reactions, his thoughts, the various complex factors which make up the individual are today probably less understood than any other natural phenomenon.
The results of this course are evident everywhere. This era is characterized by a general breakdown. In Europe a whole generation lives from hand to mouth, making no plans for the future, dreading a war that seems to it inevitable. The thought of chaos and death is part of every European youth. In Asia, the dam has already burst, and men are senselessly murdering each other. Statesmanship has proved itself a self-seeking Frankenstein. Perhaps it is now time for scientists to take the helm instead of statesmen and generals.
Man has lost his fear of thunderstorms as he has come to understand them. What he most fears now is his fellows. I believe that with a complete understanding of himself that fear too would disappear. It seems to me that science should revolt from its subservience to cruelty and greed and put itself at the service of the human race. Its service would have to stem from complete understanding. Picture to yourself a great brotherhood of men of science intent on studying man for his own salvation. Finding the scientific leaders of this day Carrel, Jeans, Eddington, Einstein, Huxley, Russell concerned about the human race gives promise that such a brotherhood may sometimes be realized. In that promise, I believe, lies eventual freedom for the majority of men from subjection to their fellows.
Of course, we have had students of man in the past, but to date, they have divided their subject into at least two separate parts. The first part, which took in the physical aspect of man, has made considerable headway, though, compared with the degree of certainty which governs other scientific studies, this too is still in its infancy.
The second division, man's study of his mentality, personality, consciousness, psyche you can call it what you will is very far behind. One reason for the lag, it seems to me, is that the division into physical and mental compartments is an artificial one. Man is a whole who acts and reacts as a whole. There is no physician who will deny the interrelation between his patient's spirits and his recovery from a dangerous illness. There is no psychologist who will not admit the effect of a disease on the behaviour of his subject. Why then let names like psychology, physiology, biology prevent us from considering man as an entity?